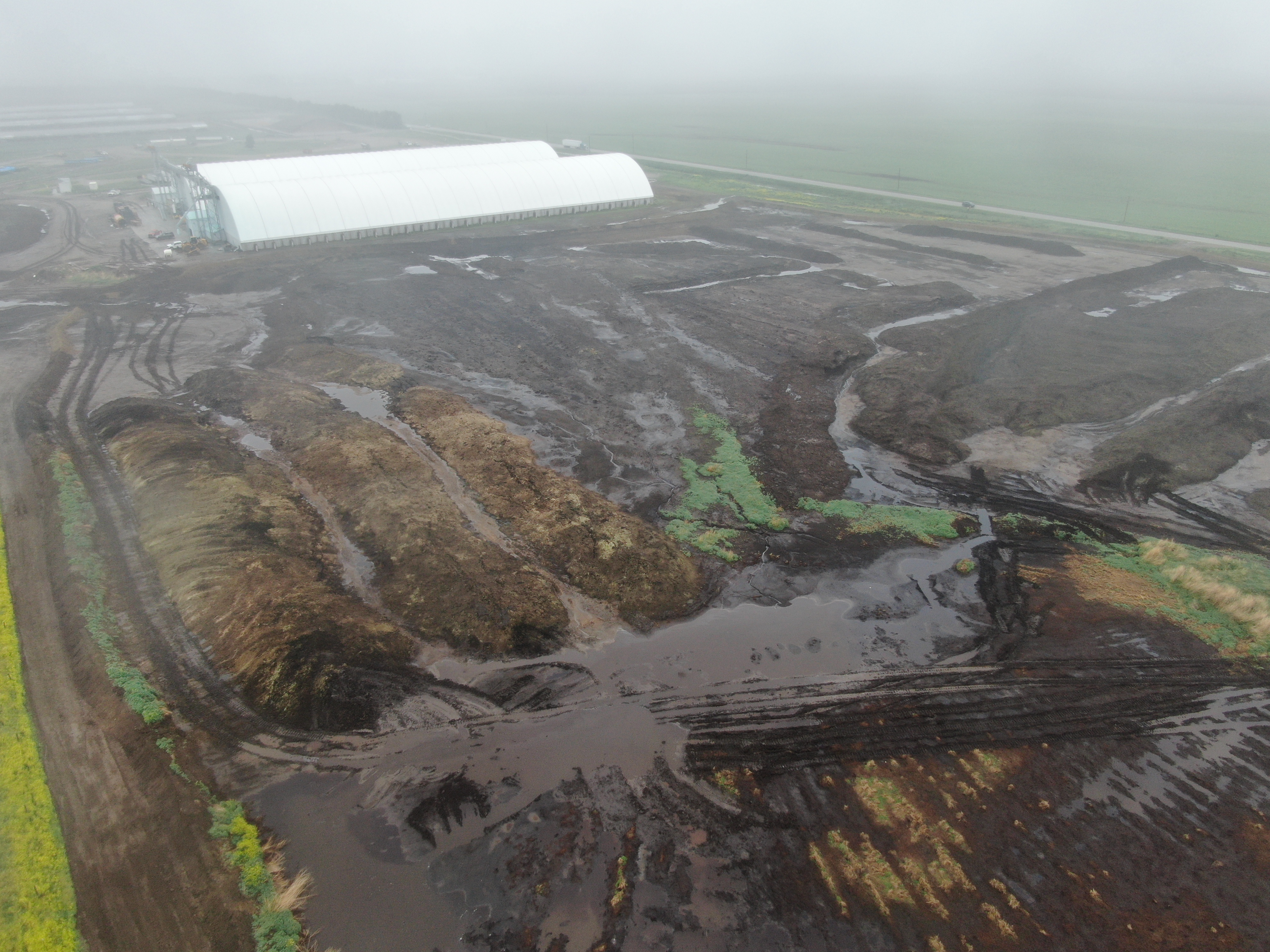 For years, the people of Mead, Nebraska, have worried about the ethanol plant that moved into their small rural community a little over a decade ago. They feared the terrible smells and odd illnesses in the area might be connected to the plant and its use of pesticide-coated seed corn in its biofuel production process.

Those concerns recently turned to outrage and anger after environmental regulators were forced to acknowledge that under their oversight the AltEn LLC ethanol plant has been contaminating the area with an array of pesticides at levels much higher than what is considered safe.

The contamination has been ongoing for years, exacerbated through accidental spills and leaks of the plant’s pesticide-laden waste, which has been stored in poorly maintained lagoons and piled into hills of a putrid lime-green mash called “wet cake.” The company had also distributed the waste to area farmers for spreading across fields as “soil conditioner”.

It was only earlier this year – after media reports exposed the problems – that state officials ordered the plant to close, and began efforts to clean up what many in the community see as a sprawling environmental disaster.

The state attorney general’s office then sued the company for multiple alleged environmental violations, citing “an ongoing threat to the environment”, and late last month Nebraska lawmakers passed a bill restricting the use of pesticide-treated seeds for ethanol production.

Residents of Mead say the crackdown on the plant is welcomed, but, in many respects, is far too late. The lingering impact of the pollution won’t simply end with the new law, nor will many of the industrial agriculture practices that caused it. Instead, the pollution continues to wreak havoc and there are fears that Mead’s trauma may be repeated in other small towns across the state where large-scale industrial agriculture practices continue.

“I believe this is an environmental failure of colossal proportions and the blame can be squarely laid at the feet of the governor and his staff who simply closed their eyes to the environmental damage being done,” former Nebraska state senator Al Davis told the Guardian.

Fish die-offs are reported miles downstream from the plant. University researchers have reported the decimation of dozens of honeybee colonies, and state officials have received reports of sick and dying geese and other birds, as well as disoriented dogs and unexplained ailments in people.

Regulators said they have found unsafe pesticide levels in a farm pond, and water used for drinking and for irrigating crops is also feared contaminated, according to records within the Nebraska department of environment and energy (NDEE). Pesticide residues have been detected in soil samples taken from an area park.

Meanwhile, AltEn lagoons are awash in millions of gallons of pesticide-laden wastewater and 84,000m pounds of distillers grains byproduct sit in piles around the plant. State tests on the water and the byproduct show staggeringly high levels of several pesticides associated with a range of health problems for people and wildlife.

Carol Blood, a Nebraska state senator, said the situation in and around Mead, a tiny village of roughly 500 people, is “dire”. She is pushing for an investigation into AltEn’s practices and is planning a series of public meetings across the state to help evaluate the scope of the environmental damage. “Based on the scale of the issue … it is an environmental catastrophe,” Blood said.

Neither the NDEE nor the governor’s office would answer questions about the situation posed by the Guardian.

AltEn attorney Stephen Mossman also declined to comment and AltEn’s general manager, Scott Tingelhoff, did not reply to requests to discuss the situation.

The pesticides creating the problems in and around Mead came from some of the world’s largest agricultural companies, who make and sell seeds coated in different types of chemicals as a tool for protecting growing crops from damaging insects and disease.

AltEn advertised itself as a “green recycling” location where agricultural companies could dispose of unwanted supplies of these pesticide-treated seeds. Bayer AG, which owns Monsanto, along with Syngenta, Corteva, and other large companies, were among those dumping seeds coated with an array of insecticides and fungicides at AltEn, according to AltEn marketing materials.

The companies could rid themselves of pesticide-coated corn, wheat and sorghum seed free of charge at AltEn, and pay a fee to dispose of soybean and other types of treated seeds, under the AltEn program.

The companies are now actively involved in the clean-up. Emails between state regulators and Bayer’s senior remediation manager, Mark Bowers, show Bayer overseeing a range of actions on the AltEn site. Among other actions, Bayer is trying to lease farmland in the area to house storage tanks for AltEn waste, and is working on a plan to spread the plant’s wastewater over area fields after the water is treated to reduce pesticide levels.

In a statement, Bayer said it was addressing “priorities in the management of wastewater and wet cake along with the development of a remediation plan stewarded by the State of Nebraska.”

Syngenta said it was working with the other seed companies on “voluntary response activities,” and is “committed to proper stewardship for the safe use of treated seeds.”

Corteva confirmed it was part of the team working to “address environmental conditions at the AltEn site.”

None of the companies would answer questions about how much of the pesticide-laced seed they deposited at AltEn over the years. A source close to the companies said they believed AltEn would handle the seeds responsibly and they were not culpable in the contamination.

A history of trouble

The ethanol plant was first introduced to Mead in 2007 as part of a “closed-loop” system developed by a company called E3 Biofuels. A 30,000-head cattle operation was set up adjacent to the ethanol facility. Operators said they would process manure from the animals into methane gas to help power the plant and use manure to fertilize corn fields. Wet distillers’ grains made as a byproduct could be fed back to the cattle, a common industry practice.

But after just a few months, the plant closed and E3 filed for bankruptcy in late 2007. AltEn later restarted the plant, telling regulators in 2013 the plant would be using grain, “mainly corn,” as its primary raw material.

Nebraska regulators discovered in 2015, however, that AltEn was using pesticide-coated seeds, one of only two ethanol plants in the United States known to do so. Records show by 2018 the regulators knew the byproducts contained “measurable” pesticide residues and by 2019 they knew the pesticides were present in “elevated concentrations.”

According to correspondence between the Environmental Protection Agency (EPA) and the NDEE, tests run on AltEn’s wet cake and wastewater showed “very high levels of pesticide residues,” including neonicotinoids, which are known neurotoxins. The fact that the material had been applied to area fields meant the pesticides could leach into groundwater and be taken up into plant tissues, contaminating nectar and pollen and threatening wildlife, the EPA warned.

The NDEE ordered AltEn to stop distributing the waste for land application in 2019 because of the pesticide levels. But the agency did not stop the company from taking in more pesticide-coated seed.

Over the years, AltEn racked up multiple violations of environmental regulations, NDEE records show. But it was not until February of this year that NDEE ordered the plant to close until the contamination was cleaned up.

Only days after the shutdown, a pipe attached to a 4m-gallon digester tank broke, washing toxins into waterways and spreading them at least 4.5 miles away, according to regulators. In May, another leak was discovered in a pipe adjacent to a wastewater lagoon.

While regulators sample water and soil, many area residents worry that the beef cattle operation adjacent to the AltEn plant has also been contaminated. They wonder how much the animals there may have been exposed to pesticide concentrates through their feed and water, and if people who consumed meat from those animals may have long-term health consequences.

“People want answers and action,” said Jane Kleeb, who chairs the Nebraska Democratic party and is pushing for resources, such as medical testing and water filtration, for the people in and around Mead.

Researchers from the University of Nebraska and Creighton University are now launching a 10-year study of the impacts on human and environmental health.

The situation is but the latest example of how industrial agricultural practices can create hazards dangerous to human and environmental health, according to Blood, who grew up on a farm in Hastings, Nebraska, and suspects cancers developed by many Hastings residents were linked to chemicals in the soil and water. The area was designated a federal superfund site because of the contamination.

“There is a lot of stuff like this that goes on in a lot of these small towns,” she said. “There are more Meads out there.”