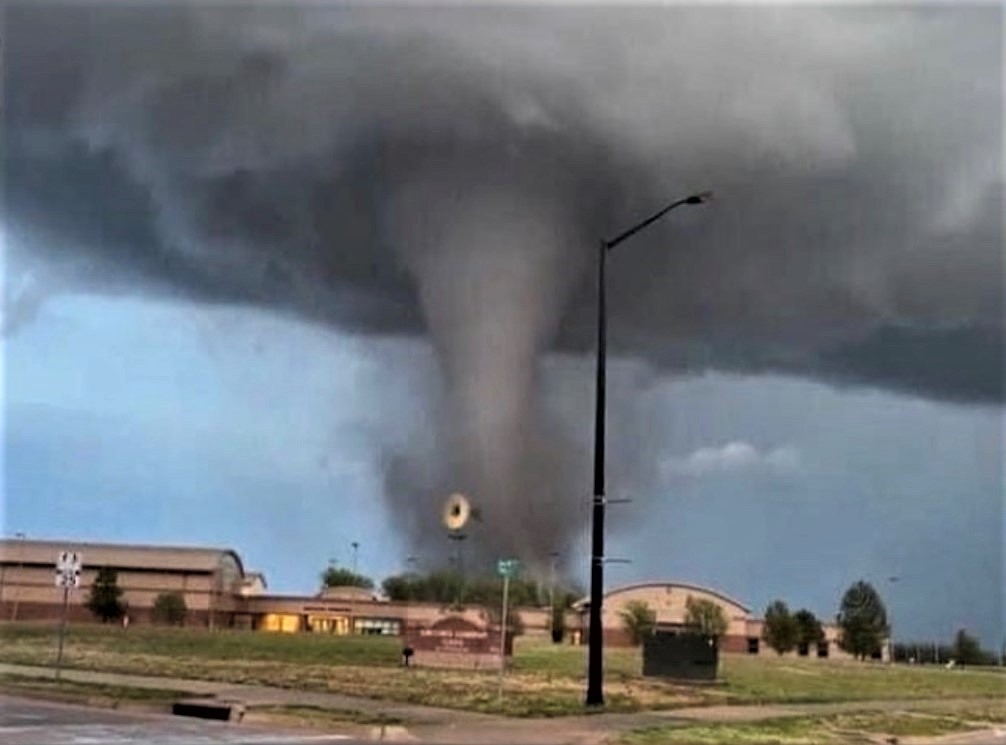 by Carey Gillam and Sophie Kasakove

On Friday night, Lindsay Triplett and her family in Andover, Kan., received emergency alarms on their cellphones. Minutes later, the roof of their home vanished.

Ms. Triplett and her family were safe. She had taken shelter in her family’s basement with her husband, four daughters and the family’s Labrador retriever, huddling under a staircase. But when they emerged, their home was in ruins, in the wake of devastation left by the tornado that hit the city directly.

“The house won’t be salvageable,” Ms. Triplett said on Saturday. “I am trying to remain calm for the girls. But really, what do we do now?”

The tornado in Andover, a city of nearly 15,000 outside Wichita, uprooted trees, heaved cars into buildings and ripped through houses and power lines. No fatalities stemming directly from the impact were reported by the authorities. But up to 1,000 structures in Andover were affected by the tornado, officials said.

Three meteorology students died on Friday in a car crash in Oklahoma as they were returning from Kansas, where they had been storm chasing.

Earlier reports had estimated that 50 to 100 structures had been damaged, but the number rose after additional field reporting from emergency crews on Saturday. And the number was likely to rise again, Mike Roosevelt, deputy chief of Andover Fire and Rescue, said at a news conference on Saturday.

Emergency management officials said that only a few people suffered injuries, and most were minor, though one firefighter was taken to an area hospital with non-life-threatening injuries.

Chad Russell, fire chief of Andover Fire and Rescue, said in an earlier news conference broadcast on the Wichita television station KAKE that “quite a few” people had to be rescued late Friday night but that no one remained in need of rescue as of Saturday morning. In some of the neighborhoods, he added, “houses were completely blown down.”

Residents received warnings from the National Weather Service eight minutes before the tornado struck. Their quick response to the warnings prevented more severe injuries and fatalities, said Chance Hayes, a meteorologist with the service. “They sheltered in homes, they sheltered in businesses, they sought shelter any place they possibly could to get out of harm’s way,” he said.

After Ms. Triplett and her husband received the warning on their phones, she and her husband opened the front door to check the skies and saw the funnel cloud approaching.

“I thought we had a little bit more time,” Ms. Triplett said. “But we didn’t.”

Once in the basement, they could hear the impact of the tornado above them. Ms. Triplett said it “was like an airplane taking off.” The pressure in their ears was strong. “And you could feel and hear a sound like a roaring wave. I think that was the roof rocking.”

Her daughters screamed as the tornado roared over them, she said. When it grew quiet, the family came out to find most of their roof gone and two walls collapsing in on the dining and living rooms. The garage had caved in on the family cars.

They spent the night at Ms. Triplett’s mother’s house a mile away. Early Saturday, Ms. Triplett and her husband returned to the home, where they have lived since 2006, to try to salvage what they could. The rains that accompanied the tornado added to the losses, soaking the family’s possessions after the roof gave way.

Ann and David Taylor were eating dinner at home with their children when they received the tornado warnings on their phones.

“As soon as I got the text, it wasn’t five minutes before it hit,” Ms. Taylor said. “We got to our basement and made it to the laundry room. I was talking about whether we needed to grab a mattress to cover our heads, but then I heard it — it sounded like a train.”

They felt it hit the side of their house, she said. “We heard the cars in our garage banging around. We were afraid the ceiling was going to come down on us.”

After the tornado passed, neighbors helped the family climb out of what was left of their house. Two cars in the garage were crushed, and the family minivan, they saw, was now sitting in a neighbor’s front room.

“It is honestly miraculous that no one died,” Ms. Taylor said.

The tornado that hit Andover was one of several that touched down in Kansas and Nebraska. Damage from tornadoes elsewhere in those states was less severe, according to the Weather Service. Hail up to four inches in diameter was reported in a rural area of southern Nebraska.

The tornado came just a few days after the 31st anniversary of a severe tornado that hit Andover in 1991, killing 17 people, 13 of whom were in a mobile home park.

Brandon Whipple, the mayor of Wichita, said on Saturday that an emergency response had begun in Andover, including the opening of a shelter in a church. He urged people to remain off the streets to make way for emergency vehicles. “PLEASE stay safe, respect the warnings and have a plan of action in case another tornado touches down,” he wrote on Twitter.

In addition to hitting Butler County, which includes Andover, the tornado struck part of Sedgwick County, west of Butler, although only minor injuries were reported, officials there said.

Winds of up to 45 miles per hour were expected to continue in the Wichita area on Saturday, according to the National Weather Service, creating potentially hazardous conditions for emergency crews. Potentially severe thunderstorms are also expected on Monday.