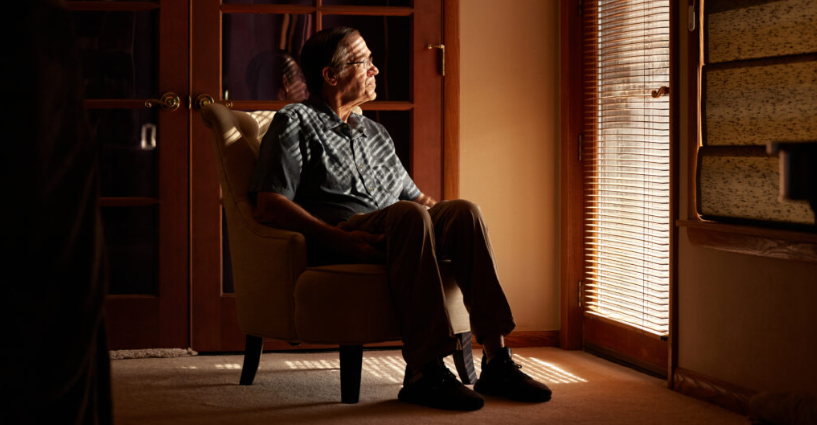 by Carey Gillam and Aliya Uteuova

Cancer has taken an unrelenting toll on 72-year-old Mike Langford. After being diagnosed with non-Hodgkin lymphoma (NHL) in 2007 he suffered through five recurrences despite multiple rounds of chemotherapy and a stem cell transplant. Now he struggles with chemo-related neuropathy in his arms and legs, and new tests show the cancer is back.

Langford blames his cancer on his longtime use of the popular weed-killing product Roundup, which he applied countless times over decades using a backpack sprayer around his five-acre California property and a vacation lake home. He alleges in a lawsuit that Monsanto, the longtime Roundup maker now owned by the German company Bayer AG, should have warned of a cancer risk.

Last month, a San Francisco judge ruled that Langford’s health is so poor that he is entitled to a speedy hearing of his claims. A trial is set for 7 November in San Francisco county superior court.

“I’ve had it so long. I’m very angry,” Langford told the Guardian a day after doctors biopsied an enlarged lymph node. “The future doesn’t look too terribly promising,” he said, trying to hold back tears. He learned last week that the preliminary biopsy results show a return of NHL.

Langford’s is just one of a long list of upcoming trials complicating Bayer’s efforts to escape the costly, ongoing litigation over the health effects of Roundup. As part of the sweeping, nationwide legal battle that has so far run seven years, approximately 140,000 plaintiffs have alleged they developed NHL from exposure to Roundup, and should have been warned of the risk.

One trial is under way now in Monsanto’s former home town of St Louis, Missouri, while another in Missouri is scheduled for October, and yet another is set in Hawaii in November. Several others are on court calendars in Arizona, Arkansas, California, Florida and elsewhere well into 2023.

For plaintiffs’ lawyers, the new trials mark a renewed effort to either force Roundup off the market or ensure a cancer warning is added to the weedkiller’s label. For Bayer, they mark a chance to add to its current Roundup trial record of four wins and three losses.

In a statement to the Guardian, Bayer said there was “overwhelming scientific and regulatory support” for the safety of Roundup, and the “strength of the science” is on its side.

It’s been four years since Bayer bought Monsanto for $63bn careening almost immediately into three costly Roundup trial losses. A plunge in investor confidence shaved more than 40% off its market valuation, and it faced calls in several countries for bans on the active ingredient in Roundup, a chemical called glyphosate that is the most widely used weed-killing chemical in the world.

The first lawsuits were filed in 2015 shortly after the International Agency for Research on Cancer (IARC) classified glyphosate as a probable human carcinogen, finding “strong” evidence of genotoxicity and a “statistically significant association between non-Hodgkin lymphoma and exposure to glyphosate”. IARC said it reviewed “all of the available studies” about a glyphosate connection to NHL when coming to its conclusions.

Despite Bayer’s insistence that the IARC scientists were wrong and that there is no evidence that glyphosate or Roundup cause cancer, it has spent the last few years trying to settle the majority of the cases, paying cancer patients and their families to avoid trials. Bayer has spent or otherwise set aside more than $16bn for settlements and other costs, including paying out more than $130m to winning plaintiffs in the first three trials.

Many plaintiffs say they have declined settlement offers, saying the amounts they would receive – less than $50,000 for some – were too low to make up for the suffering cancer had caused them.

In an 4 August call with investors, Bayer’s CEO, Werner Baumann, told them that the company was “making good progress in putting major litigation behind us”, and was buoyed by winning the last four Roundup trials after losing the first three. He said the company had successfully settled or otherwise disposed of about 108,000 cases so far. He confirmed about 30,000 claims remain unresolved.

“We are sufficiently provisioned to deal with the current and also with the future cases,” Baumann said in the investor call.

The cases largely hinge on conflicting scientific views about the safety of Roundup, and on the interpretation of internal Monsanto documents that plaintiffs say show wide-ranging corruption and collusion with regulators but which Bayer says are being taken out of context.

In these trials, Bayer has repeatedly used the Environmental Protection Agency’s (EPA) endorsement of the safety of Roundup’s main ingredient, glyphosate as evidence in its defense.

But in June, a federal appellate court invalidated the EPA’s favorable human health safety assessment for glyphosate, ruling that the EPA did not properly follow scientific guidelines when it determined glyphosate was not carcinogenic.

The court found that EPA officials discounted several important studies and said “most studies EPA examined indicated that human exposure to glyphosate is associated with an at least somewhat increased risk of developing NHL”.

The court said that the EPA ignored expert advice from scientific advisers, and used “inconsistent reasoning” in concluding that the chemical poses “no risks to human health”. Overall, the EPA determination that glyphosate was “not likely to be carcinogenic” was “flawed” in multiple ways, the court said. The EPA faces a 1 October deadline for redoing the work.

Bayer said in a statement that it believed the EPA “will continue to conclude, as it has under Administrations of both parties for more than 40 years, consistent with other regulators worldwide, that glyphosate-based herbicides can be used safely and are not carcinogenic”.

Bayer points to three recent large epidemiology studies it said had each found no association between glyphosate-based herbicides and NHL overall in “real-world use when adjusted for the use of other pesticides”. Moreover, Bayer said, “EPA published its own new meta-analysis of epidemiology studies in 2020 and, with the benefit of additional data, reported that there was no association between NHL and glyphosate in the human population.”

Many scientists say the weight of scientific evidence does show a cancer association, just as IARC concluded. They also point out that many of the studies the EPA relies on were studies produced by Monsanto.

One of the company’s most significant legal strategies has also recently taken a hit. It has asserted that because the EPA – acting under federal law – has not required cancer warnings on Roundup labels, the company can’t be accused in state courts of failing to warn users of a cancer risk.

But this approach has so far been unsuccessful – the supreme court, for instance, has twice declined Bayer’s requests for a review of the issue. The US Department of Justice issued a brief stating that Bayer’s position was not backed by the law.

These recent developments favor the plaintiffs, according to Brent Wisner, the California lawyer who was a member of the legal team that won the first three trials. Wisner and other plaintiffs’ lawyers presented juries with internal corporate records they said showed Monsanto colluded with EPA officials on glyphosate assessments, and ghostwrote scientific studies that said Roundup was safe. One series of emails shows Monsanto and EPA officials discussing quashing a separate US agency review of glyphosate safety.

“Monsanto cannot hide behind the EPA any more,” Wisner told the Guardian. The appellate court “confirmed what we have been saying for years – the EPA didn’t follow their own guidelines.” (Bayer did not respond to a request to address Wisner’s comment.)

Wisner is among several members of the original leadership team for the plaintiffs’ side who have decided to jump back into the litigation after sitting on the sidelines for two years since settling most if not all of their cases. Along with Virginia lawyer David Dickens and other attorneys, Wisner represented plaintiff Dewayne Johnson in the first Roundup trial, which Johnson won in a unanimous jury decision.

The trial currently under way in St Louis involves three plaintiffs: Cheryl Davis, 70, who has suffered through two bouts with follicular lymphoma her doctors have told her is considered incurable; 65-year-old Marty Cox, a retired US army veteran diagnosed with diffuse large B-cell lymphoma; and 75-year-old Gary Gentile who also has been diagnosed with B-cell lymphoma.

Each alleges their cancers developed as a result of their use of Roundup products at their residences.

Missouri resident Nathanial Evans, 32, also will face Monsanto in court soon. Evans started working as a landscaper after graduating from high school, using Roundup QuikPro, a blend of glyphosate and a chemical called diquat. He was diagnosed with NHL at the age of 26. His trial is scheduled for 31 October.

Also among those headed to trial is Bruce Pied. Pied, 69, operated a coffee and macadamia nut farm in Kealakekua, Hawaii, for years, spraying Roundup to kill weeds on the farm. His mother frequently would help with the spraying until she died from NHL in 2007. In 2012, Pied himself was diagnosed with NHL. Though treatment helped, the cancer has recently come back in a more aggressive form. Pied’s trial against Monsanto is set to start on 29 November in Hawaii state court.

In San Diego, plaintiff Frank Johnson is luckier than others. He was diagnosed with NHL in 2014 at the age of 46 after using Roundup on his residential property starting in 2006. He underwent four rounds of chemotherapy, and has been cancer-free since 2015.

Johnson said before he got sick he would use the herbicide up to three times a month for many months each year, mixing it in his front yard. He didn’t wear gloves or other protective clothing because he thought it was safe. He said he rejected a settlement offer from Bayer. He had a trial date set for October but it has been rescheduled for June of next year.

“I’m a strong believer in corporate and social responsibility, and companies that put profits above the wellbeing and safety of human life need to be held accountable,” Johnson said. “To still see it on the shelf advertised with no warning at all infuriates me.”

Michael Langford feels the lack of a cancer risk warning on Roundup products is a betrayal. When he would mix and apply Roundup he didn’t worry when some of the product would splash or spill on to his skin.

“It’s absurd I wasn’t aware of it,” Langford said of the IARC classification of glyphosate as a probable carcinogen. “This isn’t fair. How many other people that have this cancer are in similar situations?

As part of its plan to try to limit future lawsuits, Bayer has said it will stop selling glyphosate herbicides in the US consumer market starting next year.

That won’t stop the lawsuits, predicted Jennifer Moore, the lawyer representing Langford and several other clients with trials scheduled. She said the legal efforts would not stop until a cancer warning was added to the label or the product was removed from the market.